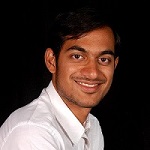 Vinay is an audiophile, blogger, electronics and communications engineer, open-source software and hardware enthusiast, a serious DIY-er… He is a firm believer of the ‘learning by sharing’ philosophy and uses it in his position as ‘audio technology blogger’ at Audiopolitan. You may reach him directly by using this—LINK.

He started off with electronics at a very early age. All credit for his early entry into electronics and audio, goes to his father, who himself is a big time DIY-er, an ardent lover of music and an audiophile; in a gist, the one who falls into the rare breed of “Build anything, fix anything” people. Ever since Vinay learnt to recognize colors, he started fervently chanting out colors of the rings, on resistors, to his dad. That was his very first electronics lesson.

On growing up seeing electronics everywhere around his house, at the age of 8, Vinay felt he wanted to try something out by himself, when his dad taught him to build the simplest of electronic circuits, the “bulb-battery-switch” loop. Starting there, he built various toys for himself like bicycle brake indicator lights, ‘matching the states with their capital cities’ game board, water-drop microscope (crazy childish idea of using a drop of water as the lens, to magnify objects, which worked!), so on and so forth.

During his engineering college days, he was very active with various DIY communities and had setup one of his own, by the name, Computer Club Mysore (CCM) with the mission of fostering creative, analytical and practical intelligence among young engineers. He is a passionate hardware designer, who designs PCBs (Printed Circuit Boards) and is currently into designing and building audio amplifiers, active crossovers and preamplifiers. He has considerable expertise with working on various microcontroller architectures and embedded systems and has trained people on such technologies during his college days. He is a die-hard fan of the Linux operating system and an open source technology evangelist. Physics and Mathematics always pique his interest; the credit of the latter going to his mother.