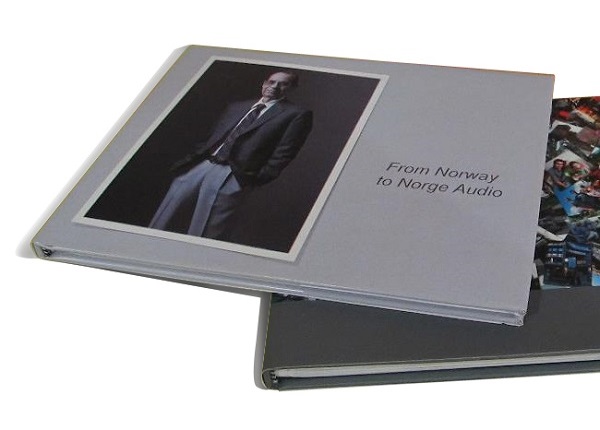 From Norway to Norge Audio is a photo book designed by Gaute Johannesen, printed by Apple Inc. in Norway and was released in September 2009 for non-commercial circulation. Mr. Bajaj was generous enough to give a signed copy of this priceless photo book (only 05 copies were ever published) to Audiopolitan. This presentation is from the book in Mr. Bajaj’s own words.

This biographical photo book unfolds Shyam Bajaj’s long cherished dream of getting trained in some world renowned audio factory, which would inspire his company to produce quality audiophile products of the highest order. As luck would have, it turned out to be “Tandberg Radiofabrikk” of Norway.

It relates to Mr. Bajaj’s intensive training and memorable interactions with the Norwegian way of life, their culture and their quality of work ethos. All this inspired his company, Eastern Electronics, to establish Norge Audiophile Systems in India. By the way, Norge is an official Norwegian name for the Kingdom of Norway.

Tandbergs Radiofabrikk A/S located at the bank of lake Maridalsvannet was unique, as they manufactured the world’s best tape recorders and audio equipment. And the most noteworthy point was the founder – Vebjørn Tandberg; he gave all the shares to his factory workers and retained ONLY ONE share for himself… A very selfless and humanitarian gesture, worthy of emulation.

Eastern Electronics is greatly indebted to Mr. Tandberg and his employees, who have given them a unique place in the Indian audio field. Last but not the least, are the great Norwegians, who have given Mr. Bajaj and his company their work philosophy, inspiration and the drive to reach greater heights.

In addition to his technical and commercial achievements, Tandberg was a pioneer in providing good conditions for his workforce. He instituted a 42 hour week and 3 weeks yearly vacation for all in 1937, and a free pension and health insurance scheme for all from 1938. A 4 week vacation for all employees over 40 years of age was introduced in 1947, while the working week was reduced to 39 hours in 1948. There was a five day work week during the summer months from 1955, over the full year from 1969.

His life ended under tragic circumstances—suicide—after financial problems at Tandberg, which lead to the company’s bankruptcy and eventual shut down.

As my working hours at the factory were only seven hours from 8 am, I had a lot of spare time on hand. This free time, I utilized to learn the Norwegian language as well as appear for a transistor theory course form RCA of USA. A volt-ohm Meter kit was a part of this course.

This kit was to be collected from the Norwegian customs department. On learning that I was a trainee at Tandbergs Radiofabrikk A/S, the officer of the customs waived off the duty, wishing me all the best with a friendly smile. Are the Indian customs listening?

A Day Out With The Boss

One fine Sunday, I decided to explore Oslo. I took a tram Car to the centre of the city. Lo and behold, whom should I meet, none other than Mr. Vebjørn Tandberg, the boss of the factory.

He asked me, what I was doing in the city. “Just sightseeing”. Come, he said taking me by his hand. He showed me all the landmarks of Oslo – the Parliament of Norway Building, Vigeland Park, the Oslo Opera House, the Norwegian Royal Palace, the Kon-Tiki Museum, etc.

Foreigner at Tandberg: A 1964 Interview By Roger Jensen

The editor was right, it was not difficult to locate him. An original Indian working on the Tandberg 8 model assembly line. He was actually from the East, our new co-worker. Not afraid of the journalists, he gives a friendly smile and requests me to take a seat as I presented myself as the Tandbergs Nytt interviewer.

“Come from Bombay” says Shyam Bajaj in perfect English – and there is a strange story of my trip to Norway. My father had a small company that handled radios, tape recorders and other Hi-Fi equipment.

One fine day, a friend of mine brought in a Tandberg tape recorder for repairs. I did not have the necessary spare parts to set it right. Exchange of some correspondence with the factory engineer Brodtkorb to train for tape recorders. Soon after, I took a flight to this unknown land about which I knew nothing.”

“Have you travelled much, earlier?” I asked. “No this is my first trip out of India” answers Shyam…” that is the biggest experience for me. I shall be here for one year, perhaps two, so that I get to know more about Norway.”

My Instructor, Roar Kraabol has promised me a tour by car to Denmark, Germany and maybe other countries in Europe during summer holidays, so that I will be an experienced traveller before I get back to Bombay again”.

“I am interested to know more about your life in your own country” and I bombarded him with some small and big interesting questions.

“India is a big country and is populated by 500 million people. It measures about 3 ¼ million sq. meters. (Norway is exactly one third). The living standard has had a strong growth lately. We have refineries, iron and steel industry.

We have factories which manufacture Fiat, Oxford and Herald cars. Huge assembly factories for assembly of electronic items such as Philips, Murphy, Pye and Grundig. These are assembled from knocked down conditions, as import of complete products is banned.”

“Can you not sell Tandberg products?” “No, not the consumer products, but we could try the Tandberg Language Lab products.”

“Language difficulties?”(Standard question to a foreigner). “I am used to that from back home… We have several languages and dialects in India. The main Indian language is Hindi.

My mother tongue is Sindhi and in Bombay several others, like Marathi, Gujarati and Urdu… In School we learn English from the age of six. What type of education have you undergone, I ask carefully and I feel that I have spoken like Kari Borg Mannsaker.

First 11 years in a high school and thereafter 4 years at the university level, graduating in Economics, simultaneously I studied electronics in valve theory and took a diploma in that… Now, my ambition is to learn more about electronics.

Have you seen anything in Oslo? “Oh yes. I have already seen Frogner Park, Kon-Tiki Museum and viewed the city from Grefsenkollen, from where I live.”

“What are your impressions of Oslo and Norway? “ Absolutely very impressive and I am looking forward to seeing the snow for the first time and perhaps attempt to ski as well.”

What about the climate? “It’s a bit cold, but I will get used to it” says Shyam Bajaj and smiles after this interesting interview.

The Sound Of Music

I had booked my seat to see the movie “THE SOUND OF MUSIC” in a theatre in Oslo for the 16:30 show. Unfortunately I landed up for the 18:30 show, only to be told by the escort that the ticket was invalid for the show.

Noticing my crestfallen and sad look, the escort asked me to hold on for a minute. A minute later, he appeared with a chair, which a placed along the aisle and requested me sit and enjoy the movie. The generosity of the escort really touched me.

A Letter From Norway

Towards the end of my trip to Oslo, I shot off a letter to the Norwegian Government, wherein I mentioned the Norwegian hospitality and friendliness bestowed on me by them. I also mentioned how beautiful their county was.

The only slight objection I had was their steep personal taxation of 25%. I forgot about the letter I had sent…One fine day I got a letter from Norwegian Government, requesting me to collect my taxes for the past one year. I received NOK 2.500 a princely sum in those days. I gifted myself with a CANON SLR camera!

Norge Audio In A Nutshell

In 1946, Eastern Electronics started off as a small radio repair shop by the senior Bajaj brothers and subsequently sold MURPHY radios for over 20 years.

I’m an avid listener of western music since the 1940’s. By a chanced meeting with a neighbour, who was a Westrex Electric Company sound engineer. I auditioned his home built Hi-Fi equipment which sent me into raptures, which still resonates till this day. I joined my father’s workshop in 1952.

While graduating from college and attending night classes in valve electronic theory, I constructed my first valve stereo amplifiers using EL84 and the EL34 valves. By then music amplifier construction had become an obsession with me. My biggest dream was to work in a world class audio factory outside my country.

For 12 long years, plenty of correspondence with European factories like Grundig, Telefunken, NordMende, Siemens and learning the German language, resulted with no success – till a friend brought in his Tandberg tape for repairs. Request for the faulty spares from Tandbergs Radiofabrikk and some correspondence for training with them fructified…

A 12 year dream fulfilled. So passionate and obsessed was I, that I left my life partner Rani for two years (1964 to 1966) for this training mission. On my return from Norway, loaded with knowledge and knowhow from Tandbergs Radiofabrikk, NORGE AUDIO was born in 1967. Today Eastern Electronics is considered as one of the best Indian audiophile products manufacturer in the country.

The company is not afraid of the competition from local MNCs and the Chinese. Their secret lies with me using audio grade components, affordable pricing, backed up by excellent after sales service second to none in the country. Eastern Electronics believes in Guarantees and not warranties (even 41 year old Norge Audio products are still serviced till date). The company has set a loyal workers and suppliers for the past 30 years. Components are sourced from Japan, Taiwan and Scandinavia.