Paul Klipsch: The Legend In Sound 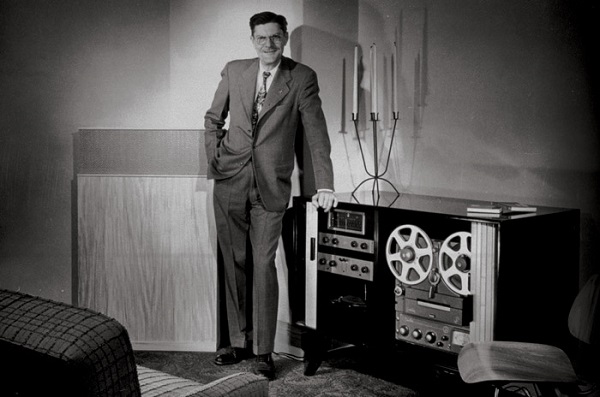 Paul W. Klipsch (March 9, 1904 – May 5, 2002) is one of America’s most celebrated audio pioneers because he revolutionized the way the world listens to recorded music. Unsatisfied with the sound quality of phonographs and early speaker systems, Mr. Klipsch used scientific principles to develop a corner horn speaker that sounded more lifelike than its predecessors.

The Klipschorn, which today is still manufactured and sold worldwide, proved that it was possible to reproduce the sound of a live orchestra inside a home. The resulting acoustics career of Mr. Klipsch spanned from 1946, when he founded one of the first U.S. loudspeaker companies, to 2000 when the Journal of the Audio Engineering Society published one of his papers. He died on May 5, 2002 at the age of 98.

Fred Klipsch, a cousin to PWK and current Klipsch owner and chairman, said, “Paul was a verifiable genius who could have chosen any number of vocations, but the world sounds a lot better because he chose audio. He was a great man who always tried to do the right thing in the right way.”

After graduating from El Paso High School, he enrolled at NMSU where he played cornet in the university band and was an award-winning member of the school rifle team. He credits his four years as a member of the Aggie Band for developing his love and knowledge of music and musical instruments.

Following graduation from NMSU, Mr. Klipsch went to work for General Electric designing radios that were then sold to RCA. In 1928, he responded to a notice on the GE bulletin board. This resulted in a new job maintaining electric locomotives in Chile for three years before entering graduate school at Stanford. After receiving his Masters Degree, Mr. Klipsch worked as a geophysicist for a Texas oil company. He later served in the U.S. Army during World War II, earning the rank of Lt. Colonel.

It was during his service at the Southwest Proving Grounds located in Hope, Ark. that Mr. Klipsch refined his corner horn speaker design. Visitors to his officer’s quarters were amazed by the lifelike reproduction and encouraged Mr. Klipsch to start his own manufacturing business. He received a patent on his loudspeaker design in 1945, registered the name Klipsch & Associates in 1946, and began making each loudspeaker with his own two hands until he hired his first employee in 1948.

During a 1999-videotaped interview, Mr. Klipsch claimed that he did not, in fact, name the Klipschorn himself. He said that he made a sales call to a man in New York City during the first years of operating Klipsch & Associates and, surprisingly, the business prospect already knew about the revolutionary new loudspeaker. “We’ve heard all about your corner horn,” the man said. “We call it the Klipschorn.”

The eccentric touch and no-compromise spirit of Paul W. Klipsch has indeed become part of the consumer electronics industry, the practice of engineering, and acoustic research itself. For example, Mr. Klipsch related that when he was developing a smaller speaker for use between two Klipschhorns, an acquaintance declared that he couldn’t possibly introduce it to the public because it was in direct violation of Mr. Klipsch’s own corner horn principles, and amounted to acoustic heresy. “The hell I can’t,” Mr. Klipsch said. “And that’s exactly what I’m going to call it!” A year later the Klipsch Heresy loudspeaker was introduced and, ironically, it became a bestseller in the church sound reinforcement market.

Many of the outrageous, but absolutely true stories of the eccentricities of Paul W. Klipsch were captured by author Jim Shahin in a 1989 interview for American Way Magazine.

“The official company motto is immodest: ‘A Legend in Sound.’ The unofficial one, directed at competing manufacturers who make what Paul Klipsch considers outlandish claims, is blunt: ‘Bullsh*t.’ The word is printed on plastic yellow lapel buttons that Klipsch hands out at trade shows.

“Such is the behavior of the much-storied Klipsch. Exasperated ministers tell of his taking notes during sermons so as to better take issue with them after the service. (On one occasion he is reported to have commented to a cleric by opening one side of his coat to reveal the word Bull and the other to reveal – yep, you guessed it.) Parishioners remember his walking over pews to get out of church.

“A Little Rock audio retailer relates with astonishment that Klipsch drilled a hole through the top of his Mercedes dash board – ‘A Mercedes,’ gasps the retailer – to install a gauge of some sort.

“Klipsch co-workers tell and retell the famous story of Klipsch stripping down to his skivvies and turning up the temperature in his office to broiling so that he could dissect a calculator to discover why its manufacturer said it wouldn’t work in extreme temperatures. (Klipsch, incidentally, found the answer and wrote the company’s president to tell him how to fix the problem.)

“There is the tale of his contorting his airplane into positions that terrified those watching from the ground; when asked what he was doing up there, he replied that he wanted to find out what would happen if he put the plane in stall position with the engine on.

“He is said to wear several watches simultaneously. Acquaintances are curious about the scribblings and graphs he keeps in a brown leather notepad that juts out of his back pocket. And everyone warns visitors against riding in his car. ‘If he gets an idea while he’s at the wheel,’ explains one of his friends, ‘well, he just seems to forget about the road.’”

In addition to the Klipschorn and Heresy, the Klipsch Rebel, Shorthorn, Cornwall, La Scala, and Belle Klipsch are among the most well known loudspeakers developed by Paul W. Klipsch. Many of these models, which are regarded as some of the world’s finest, are still manufactured and sold around the world today.

The Klipschorn is the only speaker in the world that has been in continuous production, relatively unchanged, for over 60 years. The K-Horn, as it is called fondly, became a three-way design in 1951, with 1-, 2-, and 15-inch horn-loaded drivers. Design specifications continued to evolve over the years, and at different times Stephens and Electrovoice woofers were used as the standard drivers. The K-Horn and all subsequent Klipsch speakers are designed in accordance with the founder’s four core principles: high efficiency, low distortion, controlled dispersion, and flat frequency response.

Incredibly, the 50.75-x-31.25-x-28.25-inch, 175-pound K-Horn is still in production and is still hand-built in Arkansas with the 1951 driver configuration. As big as it is, Paul Klipsch’s original intent was to design a compact version of a professional movie theater speaker, but one that would sound great in a home. Fast-forward to 2013, and big horn speakers are still used behind the screens in cinemas, so it should surprise no one that this over 6-decade-old design outperforms most contemporary home theater speakers.

While there have been hundreds of incremental design improvements to the Klipschorn over the years, the fundamentals are unchanged. The 1949 price was USD 590 each, which was very expensive for the time, so the current USD 4,500 (equivalent of INR 270000) MSRP seems very reasonable for a speaker hand-built in the USA. For more information on Klipsch Group Inc. please click on this – LINK.