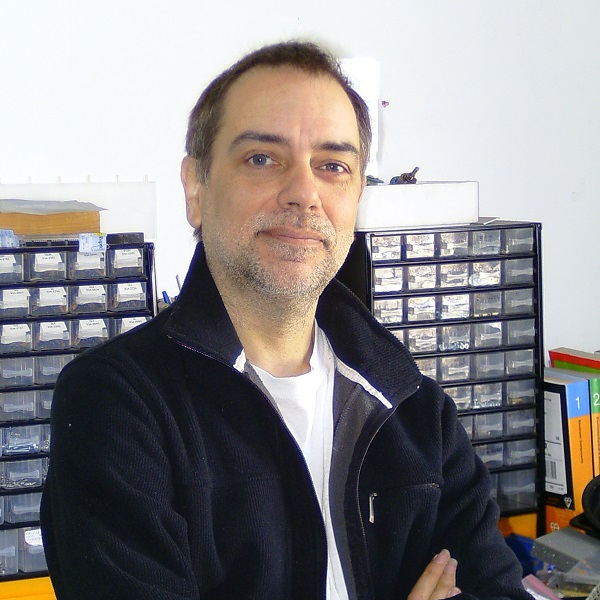 Andrew Rothwell is the man behind Rothwell Audio Products Ltd., UK. Incorporated in 2003, Rothwell Audio makes a range of hi-fi electronics in England, specialising in vinyl replay, and a range of guitar effects pedals.

AR: For me, music is an obsession verging on a curse. As a child I loved music and I started trying to learn to play keyboards after being knocked out by hearing Rick Wakeman. I went to my first concert to see Yes in 1977. However, keyboards weren’t really for me and I took up the guitar. I studied classical guitar, then started playing electric guitar. I listened to a lot of rock music.

Later I discovered Pat Metheny and started getting into jazz. I’ve listened to and played mostly jazz since then. A few years ago I started messing about on the drums after a friend asked me to store an old kit at my workshop. Then about two years ago, I really started to take the drums seriously and I started gigging as a jazz drummer within about six months. Maybe I wasn’t quite ready, but having to perform in front of an audience really makes you focus and get your chops together, and you learn stuff you can’t learn any other way.

I also compose and have produced music for TV, corporate video and theatre. The more I learn about music the more it remains a mystery.

GD: How did you come up with the idea of Rothwell Audio?

AR: I got involved with hi-fi initially because back in the 1970s there wasn’t the range of gadgets and technology around that there is now and hi-fi was something that everyone – or at least males – seemed to be into. I soon realised that better hi-fi systems give you more musical satisfaction. However, hi-fi was expensive and since I’d recently left university where I studied physics and had just started work at British Aerospace as an electronics engineer, I started to dabble with DIY designs. That’s when I discovered that I could make stuff better than what was available commercially, or at least better than what I could afford at the time.

I designed a valve phonostage back in the late 1980s which was far better than anything I’d heard previously. That later became the first commercial product from Rothwell. Back then, outboard phonostages were almost unheard of, and the Rothwell unit was possibly the first British phonostage available. And of course, being a valve design with an outboard power supply made it quite radical at the time and pre-dated ideas that have since become commonplace.

I later started working for Alphason Designs. At the time they were making the HR100 tonearm and Sonata turntable, and they were making loudspeakers, too. They wanted to get into making amplifiers but had problems with the designers who they had hired previously, so I was hired to design some new stuff. However, the amplifiers were short-lived because the company was taken over and the new owners wanted to go in a different direction. Alphason eventually concentrated solely on hi-fi furniture, racks, speaker stands etc.

So after I left Alphason I decided to start making hi-fi under my own brand and I started with the valve pre-amp which I had designed before working for Alphason. I had learnt a lot about electronics from my time at British Aerospace and learned about production methods from my time at Alphason and I thought the time was right to form my own business and make the products that I wanted to. The guitar related stuff came much later. I think it was about 2007 when we started making the first guitar effects pedals.

AR: A lot of the equipment I use currently is stuff I have made myself – either my own commercial designs or prototypes and one-offs used to test ideas.

AR: I used to make power amplifiers. The Rubicon (Click on this – LINK) was a lovely sounding valve design, but that was before the market became saturated with valve power amps. I’ve also made transistor power amps, but have dropped them from the catalogue to specialise in vinyl playback.

Ironically, Rothwell Audio Products doesn’t currently have any power amps in the range at present, but developing more refined circuits throws up ideas that can be used in other things, too. It just doesn’t seem commercially viable for a small company like ours to compete in the power amp market, regardless of how good the designs sound. People are still swayed by large output power, massively over-engineered construction, huge heatsinks etc, and I don’t really want to enter that particular competition. There will always be big companies with big purchasing power who can win that game, and somehow they get away with the fact that their amplifiers actually sound very average. A lot of people don’t seem to care because that’s the sound they’ve come to expect from amplifiers.

Anyway, our niche is specialising in vinyl replay. We make phonostages and MC step-up transformers and do very well with them.

AR: I listen to jazz, mostly. I got my first Pat Metheny album about 30 years ago, and although some of his music is considered quite poppy or an easy listening type of jazz, that was how I got into jazz. I also listened to jazz/rock such as Mahavishnu, and that was another route into jazz. I then discovered Miles Davis, Keith Jarrett, Sonny Rollins. And of course, jazz continues to develop, though it has fragmented and diversified and doesn’t have large audience it had way back in the 1940s and 50s.

I’ve seen Pat Metheny about a dozen times or more, and even travelled to Holland and Italy to see him. A lot of the music I hear these days isn’t recorded at all – it’s straight from the instrument into my ears :-). Being on stage or in the audience close up to drums, saxophones etc. really keeps me in touch with how real instruments sound. A lot of the gigs I go to are very small and there isn’t even a PA required, so it’s about as pure as it gets.

I still listen to other kinds of music, too.  Even after all these years I still love Dark Side Of The Moon, and I like Vaughan Williams, Joni Mitchell. One of my favourite albums is Making Music by Zakir Hussain. It’s not a jazz album, though most of the musicians are usually considered jazzers.

GD: MP3s & free downloads are very popular today, what music formats do you listen to?

AR: I still listen to vinyl and CDs for the most part. MP3s are ok for convenience, but not having anything tangible and no sleeve artwork is a disappointment for me. The real danger with MP3s though is that it leads to people devaluing music. A lot of kids have never paid for any music at all, and I think a lot of the stuff they have downloaded, they haven’t really listened to. It was free, they listened to it once or twice and then forgot about it. If they had to pay £15 for CDs, they might be more choosy about what they bought, might listen to it enough to appreciate it, and might value the work that went into it.

The surprising and encouraging thing that has happened over the last few years is that vinyl seems to be getting popular with youngsters. Maybe there is a growing feeling that music should be treated as more than a throwaway commodity and musicians should be respected enough to get paid for what they do.

Whatever way music sales go in the future, I doubt that the human race will lose interest in music. Humanity might produce and exchange music in different ways, but there will always be music. Let’s just hope that musical diversity can be sustained so we don’t end up with just a handful of global superstars, packaged by global corporations for global consumption.

Of course, vinyl is never going to be a mass market format again and the future of general music sales must be in some kind of digital download. Whether or not it is audiophile quality is probably an irrelevance for most people since they don’t have audiophile playback systems anyway. I’m sure there’ll be audiophile alternatives for the minority who want that.

AR: At the risk of sounding sad, no, I don’t think I do have any hobbies which aren’t related to music. I dabble in guitar making a bit, and I love restoring/making/modifying microphones, and I like recording music, but there’s not much that doesn’t have some connection with music. I do like walking, but I wouldn’t describe myself as a hardened fell walker, out in all weathers every weekend. I’m a fair weather walker.

AR: I don’t think I could point to any one person as the greatest single inspiration. I admire Michael Faraday for his perseverance and dedication which allowed him to rise from very humble beginnings to become one of the greatest experimental scientists who ever lived. His class would have been a huge barrier to him at that time, but he triumphed anyway.

And Vaughan Williams is inspirational to me because he was never considered to be particularly talented when he was young but he kept on making music and developing his craft and his skill and his art regardless. Slowly but surely his work became better and better, and the respect and appreciation he deserved came in time.

Reinhold Messner also fascinates me, though I think I’m awed and baffled by him more than inspired. To be the first person to climb Everest solo and without oxygen must have taken huge physical and mental stamina and I think his achievement is criminally undervalued. I suppose the common thread is I’m inspired by people who were single-minded and worked hard.

AR: I don’t really have a favourite quote.

For more information on Rothwell Audio Products Ltd. please click on this – LINK.