↓ Skip to Main Content
Home › Q & A › Indian Electrical Plug: Where Did It Originate?

Indian Electrical Plug: Where Did It Originate? 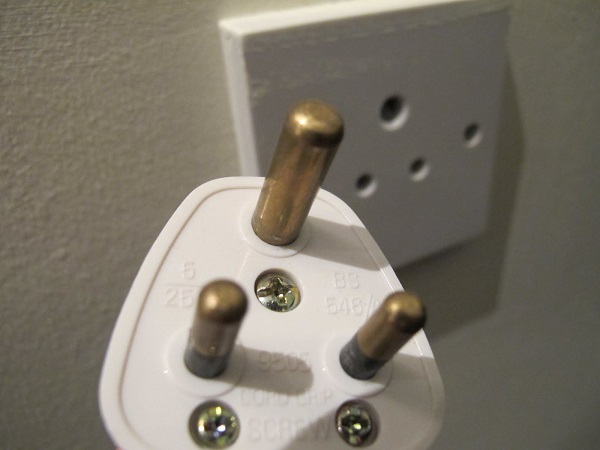 The Indian electrical plug was originally defined in British Standard 546 (the standard in Great Britain before 1947). BS 546 is still used in countries that where electrified by the British, notably India, Pakistan and East African countries and South Africa. It is still used in the UK for special purposes.

The characteristic detail of any BS 546 plug is the inspection hole in the plug housing. A compulsory feature to facilitate verification whether the earth pin is wired. In the 1930-40s it was not yet generally accepted that earthing significantly enhances electrical safety. At least in those years it made sense to check whether a 3-pin plug was adequately wired.

Plugs and sockets for portable appliances originated in Britain in the 1880s and were initially two pin designs. These were usually sold as a mating pair, but gradually de facto and then official standards arose to enable the interchange of compatible devices. British standards have proliferated throughout large parts of the former British Empire.

Two-pole and earthing-pin plugs, socket-outlets and socket-outlet adaptors for AC (50-60 Hz) circuits up to 250 V is a British Standard for three pin AC power plugs and sockets. Originally published in April 1934, it was updated by a 1950 edition which is still current, with eight amendments up to 1999. BS 546 is also the precursor of current Indian and South African plug standards. The 5 A version has been designated as Type D and the 15 A as Type M. BS 546 plugs and sockets are still permitted in the UK.

Until the late 1950s residences in the UK, Ireland and many parts of the Commonwealth were provided with plugs and sockets defined by the British Standard No. 546. Because of a change in wiring of domestic electrical systems – from radial to ring circuits – BS 546 (round pins) was replaced by BS 1363 (fused plugs with rectangular pins).

The BS 546 15A variant is still applied in the UK in situations where sockets and plugs are build-in and/or a part of complex circuits (for example in theatre wiring), in which it is difficult to trace a blown plug-fuse (BS 1363 plugs always have a fuse). Occasionally 5A devices are still used in the UK for centrally switched domestic lighting circuits, in order to distinguish them from normal power circuits.

The 30A variant was used for (semi-) industrial equipment. It is now replaced by high current and multiphase sockets and plugs defined by the IEC 60309 standard.

In the early 20th century, A. P. Lundberg & Sons of London manufactured the Tripin earthed plug available in 2.5 A and 5 A models. The Tripin is described in a 1911 book dealing with the electrical products of A. P. Lundberg & Sons and its pin configuration appears virtually identical to modern BS 546 plugs.

The first British standard for domestic three-pin plugs was BS 317 Hand-Shield and Side Entry Pattern Three-Pin Wall Plugs and Sockets (Two Pin and Earth Type) published in 1928. This was superseded in 1930 by BS 372 Side-Entry Wall Plugs and Sockets for Domestic Purposes Part II which states that there are only minor alterations from BS 317. In 1934, BS 372 Part II was in turn superseded by the first edition of BS 546 Two-Pole and Earthing-Pin Plugs and Socket Outlets. BS 546:1934 clause 2 specifies interchangeability with BS 372 Part II which includes the same four plug and socket sizes. (BS 372 Part I was a standard for two-pin non-earthed plugs which were never included in BS 546 and which were incompatible due to different pin spacings.)

Also in 1934 the 10th Edition of the IEE’s “Regulations for the Electrical Equipment of Buildings” introduced the requirement for all sockets to have an earth contact.

Prior to BS 546, British Standards for domestic plugs and sockets included dimensional specifications for the socket contact tubes. In BS 546 there are no dimensions for socket contacts, instead they are required to make good contact with the specified plug pins.

Before the introduction of BS 317, GH Scholes Ltd (Wylex) introduced (in 1926) an alternative three-pin plug in three sizes, 5 A, 10 A and 15 A with a round earth pin and rectangular live pins, a fused 13 A version of this continued to be available after the introduction of BS 1363, illustrating that BS 546 was not used exclusively at any time.

Although still permitted by the UK wiring regulations, BS 546 sockets are no longer used for general purposes. Some of the varieties remain in use in other countries and in specialist applications such as stage lighting.

India has standardized on Type D and Type M plugs. Although Type D is now almost exclusively used in India and Nepal, it can still occasionally be found in hotels in the UK. It should be noted that tourists should not attempt to connect anything to a BS 546 round-pin outlet found in the UK as it is likely to be on a circuit that has a special purpose: e.g. for providing direct current (DC) or for plugging in lamps that are controlled by a light switch or a dimmer.

Type D is a 5 amp plug, which has three round prongs that form a triangle. The central earth pin is 20.6 mm long and has a diameter of 7.1 mm. The 5.1 mm line and neutral pins are 14.9 mm long, on centres spaced 19.1 mm apart. The centre-to-centre distance between the grounding pin and the middle of the imaginary line connecting the two power pins is 22.2 mm. Type M, which has larger pins and is rated at 15 amps, is used alongside type D for larger appliances in India, Sri Lanka, Nepal and Pakistan. Some sockets can take both type M and type D plugs.

Type M is a 15 amp plug, which has three round prongs that form a triangle. This plug resembles the Indian type D plug, but its pins are much larger. The central earth pin is 28.6 mm long and has a diameter of 8.7 mm. The 7.1 mm line and neutral pins are 18.6 mm long, on centres spaced 25.4 mm apart. The centre-to-centre distance between the grounding pin and the middle of the imaginary line connecting the two power pins is 28.6 mm. The South African version of the M plug often has insulated sleeves on the pins to prevent accidental contact with a bare connector while the plug is partially inserted. Although type D is used in India, Sri Lanka and Nepal, type M is also used for larger appliances. Some sockets over there can take both type M and type D plugs. Type M is also used in Israel for heavy appliances such as air-conditioning circuits (in cases where wall-mounted units are plugged in to a dedicated socket) and certain types of washing machines. In the UK, type M is still pretty much the standard plug for theatre installations, despite efforts to move to the international blue-coloured industrial CEE plug.

The Indian Type D and Type M plugs are among the most dangerous ones in the world: the prongs are mostly uninsulated (i.e. the pin shanks do not have a black covering towards the plug body like type C, G, I, L or N plugs), which means that if the plug is pulled halfway out, its prongs are still connected to the socket! Little children run the risk of electrocuting themselves when pulling such a plug out and putting their fingers around it. The Indian wall receptacles/outlets are not always recessed into the wall, so they do not provide any protection from touching the live pins either.

The current Indian standards are defined by the Bureau of Indian Standards (BIS). The standards are revised/updated from time to time. For more information on BIS please click on this—LINK.