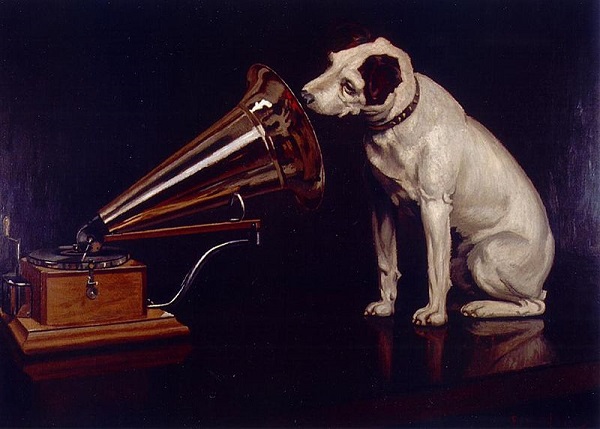 His Master’s Voice (HMV), is a trademark in the music business, and for many years was the name of a large record label. The name was coined in 1899 as the title of a painting of the dog Nipper listening to a wind-up gramophone. In the photograph on which the painting was based, the dog was listening to a phonograph cylinder.

The trademark image comes from a painting by English artist Francis Barraud, and titled His Master’s Voice. The painting was acquired from the artist in 1899 by the newly-formed Gramophone Company. According to contemporary Gramophone Company publicity material, the dog, a fox terrier named Nipper, had originally belonged to Barraud’s brother Mark. When Mark Barraud died, Francis inherited Nipper, along with a cylinder phonograph and a number of recordings of Mark’s voice. Francis noted the peculiar interest that the dog took in the recorded voice of his late master emanating from the trumpet, and conceived the idea of committing the scene to canvas.

In early 1899, Francis Barraud applied for copyright of the original painting using the descriptive working title ‘Dog looking at and listening to a Phonograph’. He was unable to sell the work to any cylinder phonograph company, but The Gramophone Company purchased it later that year, under the condition that Barraud modify it to show one of their disc machines. The image was first used on the company’s catalogue dated December 1899, and additional copies were subsequently commissioned from the artist for various corporate purposes.

Later, at the request of the gramophone’s inventor Emile Berliner, the American rights to the picture became owned by the Victor Talking Machine Company. Victor used the image more aggressively than its UK partner, and from 1902 on all Victor records had a simplified drawing of the dog and gramophone from Barraud’s painting on their label. Magazine advertisements urged record buyers to “Look for the dog”.

The Gramophone Company was not formally called “HMV” or His Master’s Voice, but was identified by that term because of its use of the trademark. Records issued by the Company before February 1908 were generally referred to as “G&Ts”, while those after that date are usually called “HMV” records.

The HMV story and the logo has inspired many painters as well as photographers throughout the 20th century. In 2009, Peter Kemp, a photographer from Holland, inspired by the HMV story decided to give it his rendition. He is a painter who has abandoned the brush for the camera. Peter’s Kemp’s award winning photography is best described as “Story Telling Pictures”. The image below is the second in a series of 4 photographs in the “His Masters Voice – HMV series” which pays homage to this great music label under the name “Musica”. Kemp is truly dedicated to his art – usually spending months preparing each photograph to ensure that his vision and creativity is fully realised. He has been praised for his dynamic concepts as well as his eye for capturing an entire narrative within each image.

This photograph featuring the model Raffaela is a stunning portrayal of the early years in the Musica/HMV Company. Notably it was a nominee in the “Framed Artist Award, 2013”.

The “His Masters Voice –  HMV series” came about when Peter Kemp’s cousin who is connected to Roel Kruize’s wife’s family heard that Kruize was the proud owner of a very special gramophone, a replica of Nipper and above all a copy of the famous painting. One of only three known specimen exists in Holland. Kemp approached Kruize to borrow the art pieces for a long weekend. Despite being unfamiliar with Kemps work, Kruize was excited by the idea. Needless to say when Kruize received a copy of the photographs he was over the moon. The objects featured in the “HMV storytelling pictures series” belong to Kruize and therefore due credit goes to him for making this series possible. Roel Kruize devoted his life and career to the success of EMI and HMV. He worked for no other company. Was the senior manager of the Dutch EMI Company for many years and had positions in EMI International in A&R and Marketing worldwide (excluding USA). He has a profound love for EMI Classics and its phenomenal heritage. For more information on Peter Kemp, his HMV series and other work, please click on this – LINK.