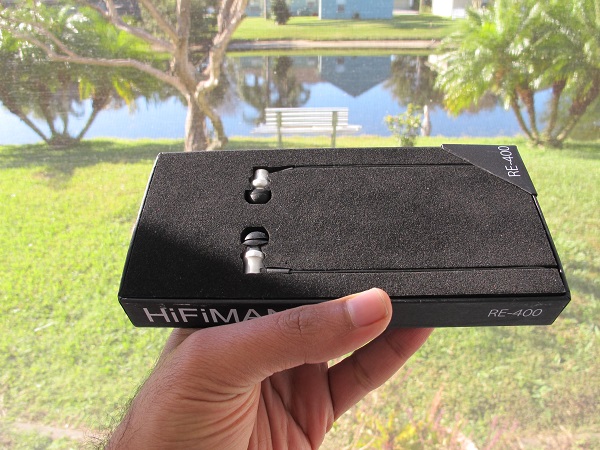 HiFiMAN is an American manufacturer of high performance headphones and portable audio products. It was founded in 2007 by Dr. Fang Bian. I ordered the HiFiMAN RE-400 Waterline In-Ear Monitor (IEM) from Amazon, US and it was shipped out by Head-Direct. This IEM cost USD 105 inclusive of shipping.

I’ve had various In Ear Monitors (IEMs) over the years from stock freebies to aftermarket brands such as UE, Sennheiser, V-Moda, Sony, Bose etc. to name a few. I’ve never taken IEMs very seriously as they are supposed to be ‘fun on the go’ and they are normally played through cheap non-audiophile grade mobile phones or mp3 players. After a few months of little use they either get lost, damaged, given away or returned within the very first month. Unfortunately, I just cannot stand any IEM sticking inside my ears for more than 30 mins, at a time, regardless of how good they sound.

I was recently in the lookout for an IEM to replace my Bose IE2. The Bose IE2 was a fun IEM that I used during workouts and evening walks. It did not stick deep inside my ear canals and were really comfortable to wear for longer periods of time. It is a very cleverly designed IEM that was somewhere between an IEM and over the ear headphone by design and comfort. The sound from the Bose IEM is not the best I’ve heard and I kept them only because of the comfort they offered. The IE2’s cables started to wear out despite good care and it was about time to replace them.

After a lot of search and research I came across this Chinese brand HiFiMAN that is currently creating ripples amongst headphone audiophiles. I was initially attracted to their RE-Zero IEMs that were selling for as low as USD 70 at Audio Advisor. They however had these small Stereo and TRS adaptors that kept me away from buying them. I then stumbled upon this new model – HiFiMAN Waterline RE-400. As of this writing, HiFiMAN has discontinued its older RE series of IEMs.

As soon as I received the package, I unpack and plug in the HiFiMAN Re-400 IEMs to my iPhone 3GS. I’m currently using my iPhone 3GS only as a portable media player and not as a phone anymore. I bought the ‘FLAC Player’ application from iTunes for USD 10. From the very first listen, I’m impressed with the performance of this new IEM from HiFiMAN. The RE-400 is effortless, clean and smooth. It’s got a sound signature that is very true tonally and does not colour or impress at any of the frequencies. I allow these IEMs to burn-in and play it through all kinds of devices and material.

After about 50 hours of burn-in I must admit that this is definitely one of the finest IEMs I’ve ever tried. It digs deep inside any piece of recording I throw at it. The highs are pristine, effortless and very well extended. Every instrument is clearly separate and placed in its own position / place in the narrow soundstage that all IEMs suffer from. I’ll get to the soundstage aspect of this IEM a little later in the review.

The bass is all about quality and not about quantity. As an example, when I play a song such as `Wanna be startin’ something’ by Michael Jackson, these IEMs show just how low they can go and does not colour the bass like how the Koss PortaPro headphones do. I’m not a bass-head and the bass in these IEMs are just about right for me. I listen to a lot of vocals and as such stay away from bass-centric headphones. The bass performance in the RE-400 compliments the mid and upper frequencies really well and it gives out a cohesive sound.

Years of listening to 2 channel audio has seasoned my ears to yearn for that magical and addictive soundstage that is so elusive in headphones. As such most IEMs and closed back headphones, by design, either have a narrow or angled soundstage. By angled, I mean the musicians and instruments appear to be playing in the top right and left hand corners of my head. I find that very annoying and unreal! Give me a narrow soundstage but give me one that is at my eye level and right in front of me. The HiFiMAN RE-400 has a soundstage that is surely an ‘out of the head’ presentation that is at my eye level, in front of me and believable. I’m up-close with the artists in a small room but I find this better than the angled soundstage I’ve heard from some more expensive headphones. I think that’s quite a feat for an IEM!

There are some other qualities that are worth mentioning. Normally, when I try a new DAC or a headphone in my system, that is good with extracting details from recordings, they always tend to sound very involving with modern recordings and may sound grating / fatiguing or boring with older recordings. With the HiFiMAN RE-400, older recordings sound just as involving as modern recordings do. I’m not implying that a poor recording will sound great, it just wrings out every bit of detail from what is already there in the recording / media file and presents it in a pleasing manner. Also, the quality difference between various recordings are made pretty obvious. Artists such as Dire Straits, Fleetwood Mac, Michael Jackson, Pink Floyd etc. must have had the very best sound engineers and equipment of their time. It’s just so obvious with the HiFiMAN RE-400s!

As far as performance goes, the HiFiMAN RE-400 does have an edge over the Bose IE2. I like the balanced, detailed, smoother and cohesive sound of the HiFiMAN RE-400 better. However, as far as comfort goes, the Bose IE2 has the advantage as it does not get inserted inside my ear canal. Also the HiFIMAN RE-400 is really compact and very light, yet it’s not very suitable to be worn for workouts at the Gym. Rigorous body movements make the HiFIMAN RE-400’s earplugs to pop out unlike the Bose IE2s that cling inside the ear lobes. The seal created by the RE-400’s soft silicone tips can make or break the sound quality. Even inserting the soft tips a little too deep inside the ear canal makes it sound really thin, muddy and terrible. So getting the fit right with the right tip is paramount.

At this price point, the Rockit Sounds RE-50 IEM priced at USD 130 is a very tempting alternative. The RE-50 uses a balanced armature driver and the RE-400 uses a dynamic driver. The differences between both types of drivers have been argued at large in the internet forums.

HiFiMAN has paid a lot of attention and resources on the packaging of these RE-400 IEMs. It comes in a black luxurious rectangular packing that looks like a `Silver Scent’ perfume bottle by Jacques Bogart. I know presentation is important as far as marketing a product is concerned, but a usable compact carrying case / pouch and a decent cloth clip would have added much more practical value to an otherwise excellent performing IEM. If a simple blister packing can reduce the cost of these IEMs then my vote goes for such an approach too. Unfortunately, these days, anything audiophile related that is priced below USD 100 is not taken seriously! I’m currently carrying / protecting my HiFiMAN RE-400 inside the Bose IE2’s carrying pouch. They look really cool in them.

HiFiMAN includes 4 pairs of silicon ear-tips. This helps to cater to different ear sizes and comfort levels. A cable winder is also included. I do not use the cable winder as I’m uncomfortable with the idea of winding the cable this way. Instead I use a 2 inches long Velcro tie to hold to wound cable more gently. Inside the Bose IE2’s carrying pouch, the Velcro firmly holds the IEM from moving about.

The only tweak I can think of applying on this wonderful IEM is the WA Quantum Chips. I’m just curious to know if those chips can actually work like they claim to be. But the question is which chip to try with an IEM?

As much as the 32 Ohms rated HiFiMAN RE-400 plays very efficiently even through an iPhone 3GS, it seems to greatly benefit in control and dynamics from a good amplifier and source. I’ve tried mine with a Musical Fidelity V-DAC II + V-CAN II powered with the V-PSU II with great results. I’ve also tried the RE-400 with an AudioQuest Dragonfly DAC. I’m impressed with the RE-400’s performance, portability and versatility. The Dragonfly and the RE-400 together makes for a state of the art playback system that can be put inside a small pouch and taken anywhere.

I saved the best for the last. I finally found an IEM that I can use for a couple of hours, at a stretch, without much discomfort. With the right fit, I’m able to enjoy these IEMs longer than I thought was possible. The low mass construction and low profile of the HiFiMAN RE-400 has enabled me to wear them even when I go to sleep without worrying about hurting myself. These IEMs demand patience! The HiFiMAN RE-400 and its associated equipment need at least an hour of burn-in, every time, to reach its full potential. Once it’s warmed up, it completely opens up and performs at its very best! The HiFiMAN RE-400 Waterline In-Ear Monitor is a welcome addition to my collection of audiophile accessories, tools and toys.

An update after 02 years of owning the HiFiMan RE-400 IEMs: I had used this specimen mostly for writing this review. After which, I had neatly stored it in a pouch and kept it in a cool and dry place, where other audio components and accessories are stored. Recently I wanted to listen to it and I found that the outer sheathing on the cable had cracks in many places. Though the IEM sounds decent for the money, the quality of materials used is really questionable. I had bought a pair for somebody else and I received similar feedback from that user as well.

For more information on HiFiMAN Corporation please click on this – LINK.