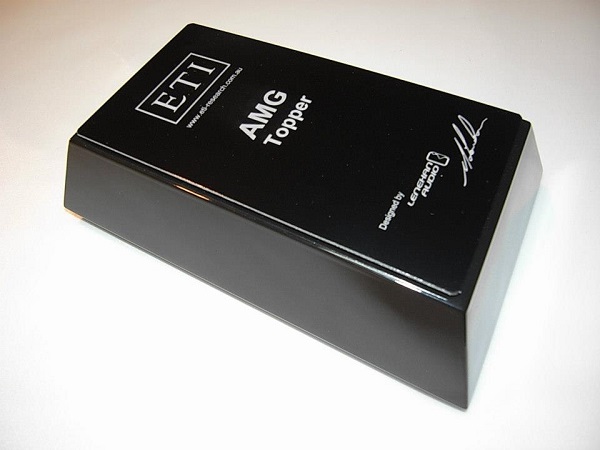 ETI is an Australian company that specialises in audio cables, cable connectors and audio accessories. ETI was formed as Eichmann Technologies International in 1999. ETI have been working closely with Lenehan Audio the past few years and in doing so have made some ground-breaking discoveries in relation to resonance control. As with their current Topper, the AMG Topper removes the resonance created by the speaker box to allow the audio to be produced more naturally to the recorded track, increasing specifically the dynamics across the low frequency range and sharpness of the image.

The AMG Toppers arrived in its purpose built cardboard box and the shipment weighed approximately 08kgs. The box included 02 hollow piano-gloss wooden bases, 02 tuned masses that is stuck on the ETI aluminium name/face plate and a pack of soft sonic resonance membranes (that looks and feels like cut black jelly). The AMG Topper is fairly easy to assemble, the soft sonic resonance membranes are placed inside the wooden base and the tuned mass is placed inside the wooden base on top of the soft membranes.

To accurately reproduce the signal that is fed to it, a loudspeaker driver must be anchored rigidly in space, thereby providing a fixed reference for the diaphragm’s motion. In practice, no commercial loudspeaker—whether standmount or floorstander—can achieve this; even those with the 75KG mass. Audiophiles have long known of the benefits of mass-loading their speaker’s cabinets by placing unsightly objects such as paving slabs on the top… yet this only makes the cabinet a little harder to move, and when the bass driver’s energy does set it in motion, it doesn’t want to stop. Mass loading, then, does nothing to attack the fundamental cause of the problem.

The ETI AMG Topper is different. By sitting a smaller weight on a compliant mounting, carefully tuned to a specific resonant frequency, it is able to actively oppose cabinet motion and thus vastly increase the stability of the speaker cabinet or speaker/stand assembly. The weight is housed in a wooden box with an attractive, gloss piano black paint finish and soft feet to prevent marking, and sits unobtrusively on top of any speaker cabinet with a flat upper surface.

The AMG or Anti Mass Generator is a proprietary acronym describing a Tuned Mass Damper or TMD. A TMD, also known as a harmonic absorber, is a device mounted in structures to reduce the amplitude of mechanical vibrations. Their application can prevent discomfort, damage, or outright structural failure. They are frequently used in power transmission, automobiles, and buildings.

Tuned mass dampers stabilize against violent motion caused by harmonic vibration. A tuned damper reduces the vibration of a system with a comparatively lightweight component so that the worst-case vibrations are less intense. Roughly speaking, practical systems are tuned to either move the main mode away from a troubling excitation frequency, or to add damping to a resonance that is difficult or expensive to damp directly. An example of the latter is a crankshaft torsional damper. Mass dampers are frequently implemented with a frictional or hydraulic component that turns mechanical kinetic energy into heat, like an automotive shock absorber.

In buildings and related structures, typically, the dampers are huge concrete blocks or steel bodies mounted in skyscrapers or other structures, and moved in opposition to the resonance frequency oscillations of the structure by means of springs, fluid or pendulums.

I tried the AMG Topper by first placing one on top of the Pioneer BDP-450 Blu-ray player that was being used as a transport playing CDs and feeding digital signal via S/PDIF to an external DAC. I played a familiar CD and sat down, on the sweet spot in my room, to listen. I heard improvements in the form of better soundstage, transient response and composure than what I’m used to. It is subtle but discernible. I appreciated what I heard.

In my 02 channel setup the speakers and the accompanying equipment are placed in 02 different rooms for maximum isolation from EMI/RFI and other vibrations. I placed the AMG Topper atop the DAC and also tried it atop the Amp too. On both occasions, I heard no difference in my set-up. Your mileage may vary.

When the AMG Toppers are placed on top of the speakers, I could feel the top name/face plate, which is stuck on the tuned mass, wobbling about when I touched them, like a jelly as it is suspended inside the wooden base with the help of soft sonic resonance membranes. It reminded me of the smart use of moving weights atop certain earthquake resistant buildings just as what is mentioned above. I was already using a DIY resonant control tweak, mentioned as an affordable alternative right below, with great success atop my speakers. They are a stiffer solution and did not wobble about like the AMG Toppers.

3M Bumpons—I use them as an after-market feet under almost all the equipment that I use. It is the most affordable and practical feet that money can buy. If you plan to use bookshelf speakers atop a table, desk or any flat surface, the 3M Bumpons can really isolate the speakers from its surroundings. This in itself is a very cost effective and essential tweak. When using AMG Toppers atop the speakers, using the 3M Bumpons under the speakers can offer optimum isolation and better resonance control.

The AMG Topper can set you back by AUD 440 a piece which is equivalent of INR 25K. As with most audio tweaks that are handmade, utilise a lot of man hours and are limited in production, will always have a pricetag to match. At the time of this writing, I’m not aware of any commercially available alternatives to the ETI AMG Toppers.

I started, many years ago, by simply placing 02 rubberised weights, weighing a total of 3.75kgs atop transport, speakers etc. and I knew early on that this tweak works but it needed to be improved. When I got hold of the 3M Bumpons, I was able to improve my design further by simply placing the Bumpons in-between the rubberised weights and between the weights and the speakers. The improvement was staggering as it brought out the best from every pair of speakers I’ve tried them with. But it looks terribly ugly and scores very low on Wife Acceptance Factor (WAF).

I was not really expecting much of an improvement from the ETI AMG Toppers compared to my own DIY resonant control tweak. I was impressed with the improvements that the ETI’s clever use of materials and engineering has done to this tweak. The difference was more audible in soundstage and composure than in bass response. Also the AMG Topper was simply stunning to look at and would score very highly on WAF.

I tried the AMG Toppers on at least 04 pairs of speakers and the AMG Topper wringed out the best performance from each pair regardless of price and size. Their impact was most profound with speakers and to an extent with disc (CD/DVD/Blu-ray) spinning transports too. I could not discern any benefit using them with DACs & Amps. Your mileage may vary.