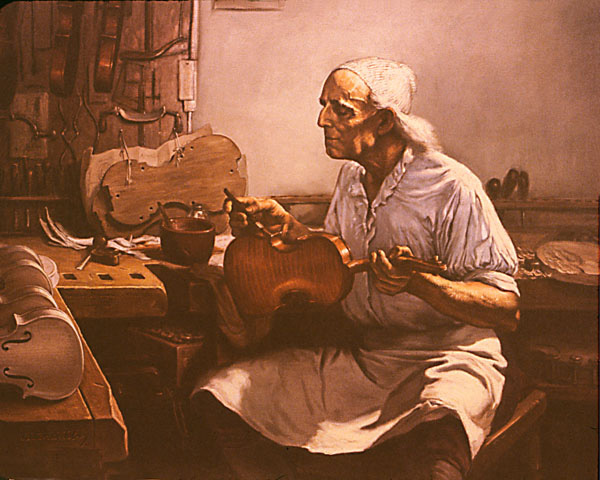 In 2011, a rare Stradivarius Violin from 1721 sold to an anonymous bidder for a record GBP 9.8 million (equivalent of INR 80 crores) at auction in a charity sale for Japanese disaster relief. Tarisio Auctions, the online auction house for fine instruments, sold the Lady Blunt Stradivarius violin for a world record price. The exquisite instrument was owned for 30 years by Lady Anne Blunt, granddaughter of the celebrated English poet Lord Byron, and is in much the same condition as when it left its maker’s hands, expert said. The sale of the Lady Blunt sparked massive interest from collectors around the globe, eager for the unique opportunity to own a piece of history. This was the first time that the violin has sold publicly since 1971 when it was sold at Sotheby’s for GBP 84,000, also a world record at the time.

A Stradivarius made in the 1680s, or during Stradivari’s ‘Long Pattern’ period from 1690 to 1700, could be worth hundreds of thousands to several million USD at today’s prices. The 1697 Molitor Stradivarius, once rumored to have belonged to Napoleon Bonaparte (it did belong to a general in his army, Count Gabriel-Jean-Joseph Molitor), sold in 2010 at Tarisio Auctions to violinist Anne Akiko Meyers for USD 3,600,000, at the time a world record. Depending on condition, instruments made during Stradivari’s “golden period” from 1700 to about 1725 can be worth millions of dollars.

André Rieu is a Dutch violinist, conductor, and composer best known for creating the waltz playing Johann Strauss Orchestra. André Rieu plays a Stradivarius violin. “I am privileged to play a Stradivarius, because it has a uniquely beautiful sound. Stradivari built my previous violin in 1667, when he was just a young man and desperately in love. You could hear it. Now I have one made in 1732. A little girl in Korea owns that other one now, because it was actually a little too small for me” commented Rieu.

Tucked under André’s chin is his priceless 281 year old Stradivarius Violin. The priced instrument is at all times accompanied by a body guard and gets to travel the world with André Rieu in First Class seats of it’s own.

A Stradivarius or Strad is one of the violins, cellos, and other stringed instruments built by members of the Stradivari (Stradivarius) family, particularly Antonio Stradivari, during the 17th and 18th centuries. According to their reputation, the quality of their sound has defied attempts to explain or equal it, though this belief is disputed. The name “Stradivarius” has become a superlative often associated with excellence; to be called “The Stradivari” of any field is to be deemed the finest there is. The fame of Stradivarius instruments is widespread, appearing in numerous works of fiction.

While Stradivari’s techniques have long been up for debate and not fully understood by modern craftsmen and scientists, it is known for certain that the wood used included spruce for the top, willow for the internal blocks and linings, and maple for the back, ribs, and neck. There has been conjecture that this wood was treated with several types of minerals, including potassium borate (borax), sodium and potassium silicate, and vernice bianca, a varnish composed of gum arabic, honey, and egg white. He made his instruments using an inner form, unlike the French copyists, such as Vuillaume, who employed an outer form. It is clear from the number of forms throughout his career that he experimented with some of the dimensions of his instruments.

A recent study has found no significant differences in median densities between modern and classical violins, or between classical violins from different origins. These results suggest that it is unlikely classical Cremonese makers had access to wood with significantly different wood density characteristics than that available to contemporaneous or modern makers

Antonio Stradivari (1644 – December 18, 1737) was an Italian crafter of string instruments such as violins, cellos, guitars, violas, and harps. Stradivari is generally considered the most significant and greatest artisan in this field. The Latinized form of his surname, Stradivarius, as well as the colloquial, “Strad”, is often used to refer to his instruments. It is estimated that he made 1,000 to 1,100 instruments and that around 650 of these instruments survive including 450 to 512 violins.

Stradivari was still a pupil of Nicolò Amati in 1666 when he began to place his own label on violins of his making. These at first followed the smaller of Amati’s models, solidly constructed, with a thick yellow varnish. In 1684 Stradivari began to produce larger models, using a deeper-coloured varnish and experimenting with minute details in the form of the instrument. His “long” models, dating from 1690, represent a complete innovation in the proportions of the instrument; from 1700, after returning for a few years to an earlier style, he again broadened and otherwise improved his model. He also made some fine cellos and violas.

The Stradivari method of violin making created a standard for subsequent times; he devised the modern form of the violin bridge and set the proportions of the modern violin, with its shallower body that yields a more powerful and penetrating tone than earlier violins. It was long thought that the secret of Stradivari’s acoustically perfect violins lay in their varnish, the formula of which, though much debated, has never been discovered. However, modern research has isolated certain factors that influence the beauty of a violin’s tone. Among these are the thickness (and, hence, the vibrational properties) of its wooden top and back plates, the condition of the microscopic pores within the wood of the violin, and lastly the formula of the varnish. Stradivari’s success probably came from expertly optimizing all these and other factors within his designs. Even after 3 centuries Anonio Stradivari remains the undisputed master craftsman of violin. For more information about the list of Stradivarius instruments that survive please click on this – LINK.

1 Comment on “Antonio Stradivari: The Undisputed Master Craftsman Of Violin”